You may have to scroll to see this full size image

Disclaimer: LMG assumes no responsibility or liability for any damages arising from the use or reliance of any information contained on this website. Read our Terms of Service for more information

The Secret To An Awesome Weekend

John Peterson, founder of The Nudge, helps us understand the psychology of how we can stop being lazy & have an awesome weekend!

It’s 6pm on a Sunday. The sunlight is dimming in your apartment. And then it hits you: The weekend is over. Did you make the most of it?

Your answer is important, because life blossoms when we spend our free time well. A weekend spent to the fullest sends out positive ripples, making us happier for the rest of the week. How can we answer “yes” as often as possible? The psychology of decision making (known as “prospect theory”) has some answers.

Let’s use you as an example. The weekend is here, and you’re considering two prospects:

First, your brain lays out the possible outcomes for each prospect:

Second, because Prospect B has 2 options and is not immediately comparable with Prospect A, your brain will try to find the average of the 2 options (think of it as an expected value of Prospect B). That's exactly where the sabotage occurs:

Combining those two tendencies, and Prospect B: Adventurous weekend looks much less inviting, so we laze away the weekend. The below diagram explains the two steps visually. 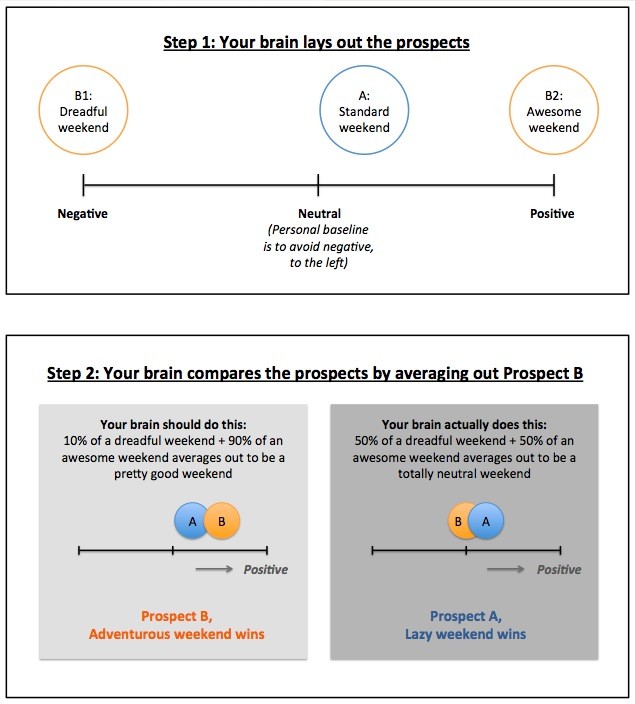 Are you having an "omg that's totally me" moment? Well fortunately, there are easy solutions:

Hopefully next time the sun sets on Sunday, you can greet it with a smile of sweet satisfaction!

Thoughts, ideas, questions? Let us know in the comments below! We're Last Minute Gear, the only outdoor gear shop where you can buy, rent, or borrow gear!

Disclaimer: LMG assumes no responsibility or liability for any damages arising from the use or reliance of any information contained on this website. Read our Terms of Service for more information